We are developed cross-platform web and mobile UI and services by .NET framework. It includes developer tools, programming languages and large class library for buildup web and desktop application which run on Microsoft windows. The first version of .NET framework was 1.0 which was released in the year 2002.

For a long time, when a Microsoft .NET developer wants to transfer solutions other than windows platform, it generally involved another language (like java or C). Those implementations in Java or other cross-platform solutions didn't seem to run as smoothly in many cases. .NET framework is 18 years old, so it’s very difficult to rewrite whole framework, so Microsoft start to scratch new framework called .NET core, which is cross-platform compatibility. It means one single source code for all platforms like windows, mac, Linux.

.NET 5, the updation version of .NET Core 3.1 and .NET Framework 4.8, which aims to developed cross-platform development for developers and bring new features. Merge .NET framework and .net core framework into single framework called .NET5 and company choose new name because they did not want users to confuse 4.x version with .net framework.

.NET5 is important release of Microsoft in open-source environment. With this release, we will have single .net runtime and framework which will have uniform behavior across platform like windows, mac, Linux etc.

.NET 5 combine .net framework, .net core, Xamarin, mono, so now this all combine into single framework and developers can take advantage of this and develop windows, iOS, and android application with this single .NET 5 framework.

.NET 5 will support command line, better performance, and smaller SDK size and single BCL (base class library) across all. 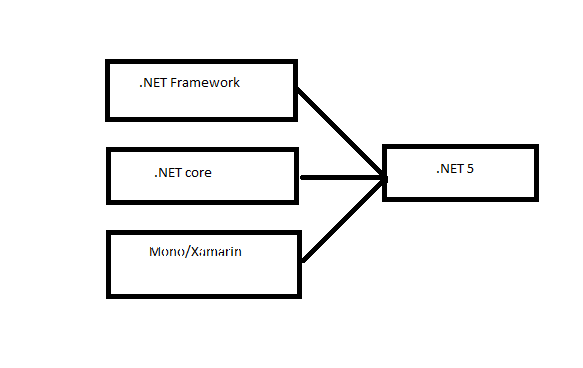 The first things we must know is .NET 5 which is single platform for develop application which run on all platform and devices like windows, mac, Linux etc. The most important thing is unifying MONO and xamarin.

.NET 5 gives a set of API for different types of runtime applications, which is identified by TFM(Target Framework Moniker).TFM is one type of token which we set in .NET project for specify target framework, using this application run on any runtime implementation supporting .NET 5.

As part of .NET 5 new features is “Top-Level statements”. This removed to add program class with main method in console application also didn’t require declaring namespace initially and write statements directly at the top-level of a file. 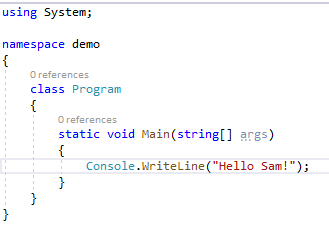 In this program, we have declared namespace, program class and main () method and this Program we write in only one top-level statement as below. In this case, the compiler generates a class and Main method entry point for the application.

Top-level statements are implicitly in the global namespace and executed in the order they appear in the file. Top-level statements can only be used in one source file in your application. The compiler generates an error if you use them in more than one file.

Record types are other great features of C# 9 that enable whole object to be immutable and make it acting like a value: Records.

Record type is a one type of reference type object which gives data encapsulation functionality.

Records are by default immutable reference types. Property values cannot be changed after initialization. If we want to change properties values, then need to create another object instance using WITH keyword. 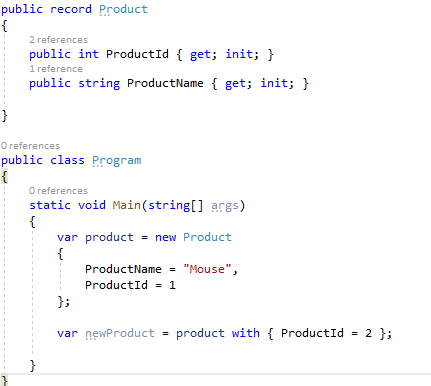 Every record type gets an equal’s implementations. Records work like struct means value type comparison, means value can be compared with value-based approach. Constructors and deconstructors are allowed in Records. 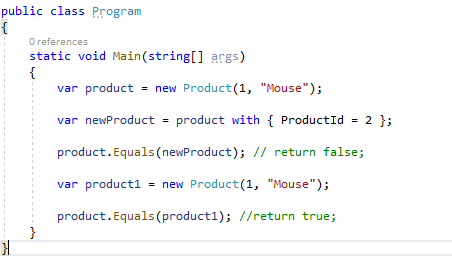 MAUI is an evolution of Xamarin. Forms which extended from Mobile to Desktop application. Using MAUI we share same UI layouts and designs and also same business logic, fonts and images, code to all platforms, which consume time to design and reduce complexity in all platforms. Developers can write both cross-platform and platform code within one project means one project targeting multiple platforms and devices. 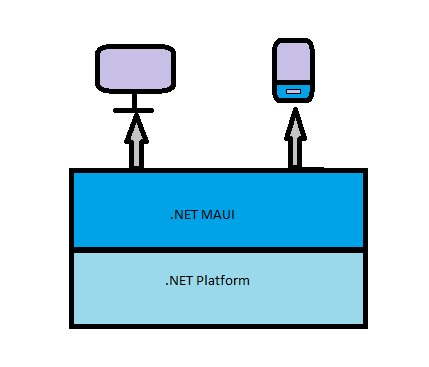 Using MAUI, developer can access to sensors, like accelerometer, compass, and gyroscope on devices and check the device network connectivity state and detect changes, gives the device information on which app is run.

This feature is still in under develop and will be released with .NET6

The fourth things we must know about .NET 5 is support single-file applications, means application published and build both in one single file also bundled all dependencies are into one file.

When the app is run, Single-File Applications approach give facility to load all bundled dependencies directly from that single file into memory. Now, Developers not need to publish/deploy application, only do publish or deploy application. Unlike .NET 3.1, this approach not allow only binary package.

• Configure publish with a project file:

• Publish as a single File:
We can see setting to use while creating a build for app.so now select framework-dependent as deployment mode and target runtime as win-x64. 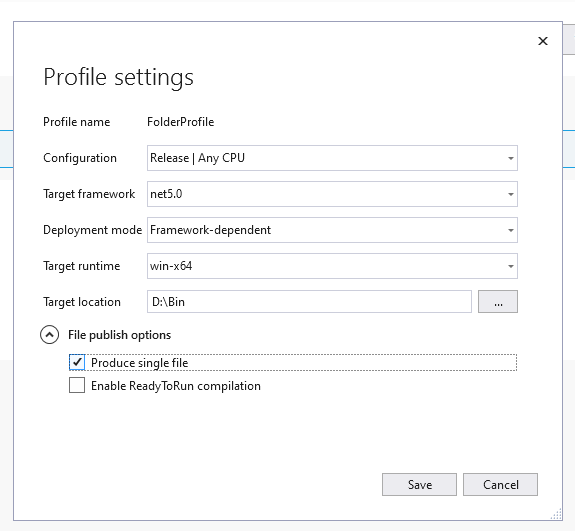 The fifth thing we must know about .NET 5 is that not supported technologies means removing a few features supported in .NET Framework. Let’s talk about that removed feature.

• WCF (Windows Communication Foundation): The traditional communication framework for window is WCF which going to be deprecated. This news is shocking for developers that have to use service-oriented applications. We know the main concept of .Net 5 is a cross-platform. Microsoft recommending to use gRPC which is modern and open-source framework that run any enviourment.

• WWF (Windows Workflow Foundation): In .Net5 also not include WWF.As of now not comes any technology as a replacement for WWF.However, we use CoreWF which is open-source.

.Net 5 includes below new features as compared to .NET Core 3.1:

• C# Updates: .Net 5 comes with new Features of C# with version 9.C# 9 includes features like Records value-type, Relational Pattern matching also including logical patterns with new keyword like and, or and not, top-level statement, function pointers.

• F# Updates: Net 5 comes with new Features of F# with version 5.F# 5 includes features like interpolated strings like C# and JavaScript. In addition, also set string interpolation with typed interpolation in that gives type for each formatter specifier.

• Single file app: In .Net core 3.1, when users run single-file app, first extracts all files to directory before running application. Net5 improves this functionality by directly running the code without extract files from the app.

How to create .Net 5 Application 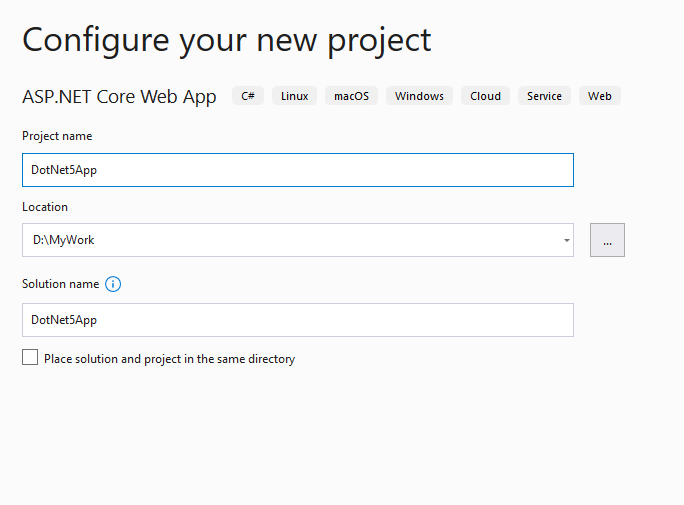 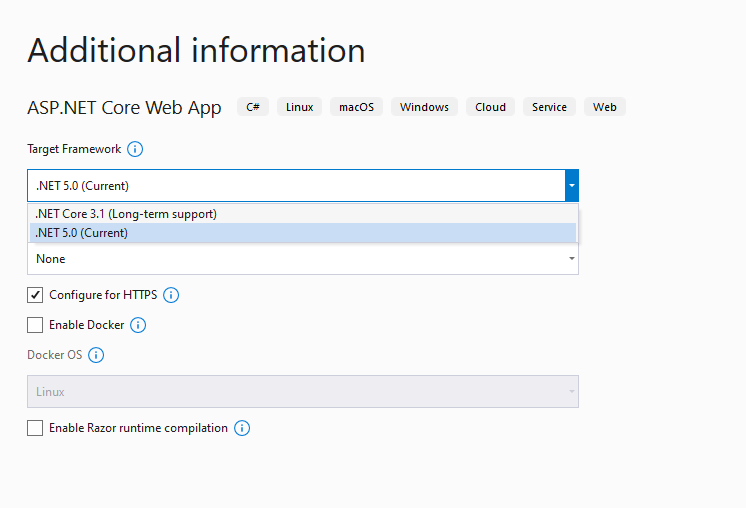 Settings for our .NET 5 Web Application

The following is the screenshot of Visual Studio for a newly created Application:

Project has been created successfully targeting .NET Core 5.0 now we run the application.

Now, we have an idea of how .NET 5 will impact our existing .NET project and give new opportunities and offers and future of .NET 5 is exciting and very interesting. .NET 5 will become simpler while having more expansive and wider utility and capability with new features. 2021 has been a year of change with businesses struggling to survive in the competitive markets. It ...

Overview First, we need to know what .NET framework is. Let&rsquo;s understand first it. .NET frame...

Innovative technology trends are driving the eCommerce industry, and in 2021, the need to evolve rap...