Is Flutter the future of Cross Platform App Development?

For the last couple of years, cross-platform app development is dominating the Mobile Application development industry rather than Native Development. Business needs are changing from day to day because of an increase in growth and demand. There are a lot of cross-platform technologies like: React Native, Xamarin, Ionic, PhoneGap, Sencha, Cordova and many more. Some of them are already dead or it is their endgame now. The main reason is either they were limited and needed knowledge from many areas including framework itself and native platforms of iOS and Android.

Flutter is an open source SDK platform developed and managed by Google. It was first released on Github in August 2016. It enables the developers to create modern feature-rich Android and iOS apps. Flutter is a red hot tool in the market, but it has excited the mobile app developers since the beginning. At the present, it is considered one of the best cross-platform app development tools. Flutter is considered to be a strong competitor to the already well-accepted React Native. Given the popularity it has amassed over this short span of time, many consider Flutter is the future of cross-platform app development.

Flutter uses Google’s own programming language, Dart. Dart is rather not popular, but it is the same family as C/C++, Java, Swift. Dart language does not require any expertise as a prerequisite and is very easy to quickly adapt, so around a week or two is needed to kick in. So, it will not be unfair to call Flutter easy to learn and master. It is one of the main reasons for the app developers being drawn to its simplicity and efficiency. Flutter documentation is very neat and clear-cut, that’s why it has managed to inspire the developers to adapt and use Dart swiftly.

Flutter has great performance which makes it very popular among the developers. Performance has always been the point of concern for the hybrid frameworks. Mobile apps that are developed using the Flutter framework have immense speed over React Native. React Native uses the same fundamental UI building blocks as regular iOS or Android apps and the JS runs in a separate thread and communicates with native modules through a bridge. Flutter is ahead of time compiled to machine code and gives better performance. In Flutter apps, UI components as well as whole logic is compiled, that’s why every so often Flutter apps are as fast or even faster than the native Android apps. We can improve the speed of a React Native application with the use of third-party libraries. Nonetheless, in the cutthroat competition, React Native cannot outplay Flutter in terms of app performance.

React Native has a massive developer community. There are lots of tutorials, libraries, plugins and UI frameworks that make it easy to learn the technology and start the development. Flutter has a lot of catching up to do if it’s to match React native, which is typical for any new, young tool. It’s worth noting that the Flutter community is growing exponentially. Stack overflow tag trends show an intense increase in developer interest in Flutter. Flutter has 82.5k stars and 10.7k forks on Github, while React Native has 83.5k stars and 18.7k forks. Flutter has a smaller, less experienced community at present, but current trends indicate that Flutter will draw level with React Native in this respect. Flutter developers at Google are really good and Flutter documentation is really fantastic and easy to follow for the beginners as well. Plus, Flutter has tons of plugins which makes development easier. One can simply add the features without having the code written from scratch. This saves a lot of time and resources making the app development faster and fun.

One code for 2 platforms and many more to come!
Writing various codes for various different platforms can be extremely time consuming and difficult, not to forget the importance of maintaining consistency. With Flutterm developers write just one codebase for your 2 apps, covering both Android and iOS platforms. This spares a great deal of time and assets that go into the development and testing.

Plugins & Libraries
Google’s support for Flutter is impressive and it has tons of plugins which makes the development easier. Flutter is designed to support Material Design out of box, so the framework supports much more widgets. A developer using Flutter can create most of the views with pre-made widgets which are easily customizable and cross-platform consistent. This saves a lot of time and resources making the app development faster and fun. Flutter has recently announced plugins for various tools such as Supernova, Rive, Adobe XD, etc. which are helpful to convert Adobe XD file to Flutter widgets code and develop animation for Flutter. With all the widgets, tools, plugins and packages that the Flutter offers, you can customize them as per the requirements. React Native supports only basic components out of box, but there are outside repos with many additional components for React Native. A developer can use them in a project but that requires additional effort and time.

UI/UX that your users will love!
Flutter doesn’t rely on native system components, but it has custom widgets which are rendered and managed by the framework’s own graphics engine, Skia. Even new apps look the same on older iOS or Android systems, so you never have to worry about supporting older devices. Flutter apps have a very user-friendly UI with pretty easy to create animations, a crucial advantage for Flutter over React Native. Moreover, Flutter developers can theme an app in by using ThemeData, with which can set all values for fonts, colors, and aesthetics once and for all instead of manually changing them everywhere. Flutter was created in such a way that you could easily create your own widgets, or simply customize an existing widget for better UI/UX experience.

Hot Reload
Flutter offers a very useful feature for app developers, Hot Reload. It saves a lot of development time. Developers can make changes in the code and see them straight away in the app. Hot Reload usually only takes milliseconds and helps dev teams add features, fix bugs and experiment faster. Hot Reload enables better collaboration between developers and designers when they want to improve how the app looks and check effects immediately. With native app development, you need to wait up to several minutes to see every change you make. 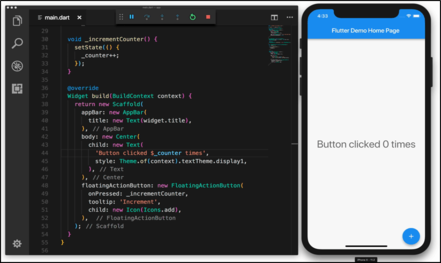 Perfect for MVP!
Flutter is really a good choice for small and medium size applications or when content and basic features require constant iteration. If you want to show your product to investors as soon as possible, you can build a Flutter mobile application that looks pure native on both Android and iOS. Developing two separate native apps would take much more time and money.

The future ahead!
Apart from cross-platform app development for iOS and Android platforms, Flutter has also recently announced “Flutter for Web” and “Flutter for Desktop”. Although, both of these features are still in Beta and Alpha stage respectively, it seems Google is pretty serious in making Flutter truly a cross-platform development framework for all the platform, including Mobile, Desktop and Web.
Flutter as a framework is looking very promising and right now has a big developer community. Even at present time, we can find complex apps in the market which are based on Flutter, like Reflectly, Alibaba, Google Ads, Hamilton Musical, Birch Finance, Dream11, Hookle. Please check Flutter Showcase on more apps built with Flutter .
Along with cross-platform development, Flutter can pave the way for developers to develop for the Fuchsia OS platform. Fuchsia is an experimental operating system, which is in development at Google and many think that Fuchsia will replace Android in near future.