As Python 3.11 is coming nearer to its final release in October 2022, more and more speculations are being made about its features and growth. It is going to be 10 to 60% faster than its last version, 3.10. If you are keen to observe the changes, you can install the beta version of it and preview some of the new features. When Python developers have already started leveraging this period between a beta release and a final release to prepare for its launch, it is crucial to know the significant changes in 3.11 and work towards the upcoming trends in 2022.

Before jumping to the upcoming trends, let us understand some of the most discussed features of Python 3.11.

Upcoming trends of Python Development to witness in 2022-2023

With the completion of its three decades, Python has established itself as an imperative language giving tough competition to many of its competitors. Here is data to quickly check which is the most popular language in 2022-23?

Now that you are clear about the language's popularity and its eternal nature let us check out the Python Trends in 2022-2023. 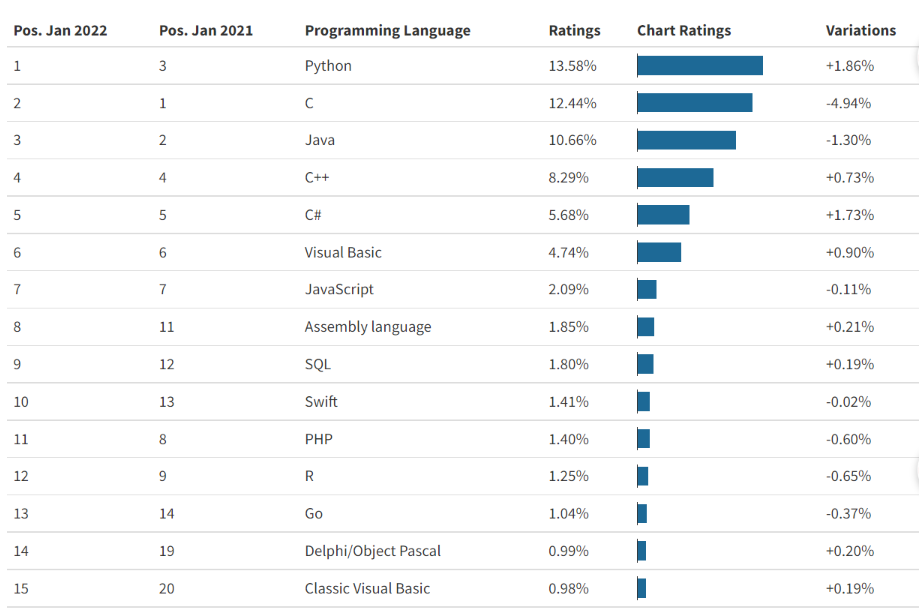 Artificial intelligence is becoming more and more prevalent in different segments of our life, and in 2022, there will be a surge in the use of Python for AI applications. Python is used in building various types of AI systems, which require heavy data. Many organizations are working on developing intelligent systems that can work on big data and calculations at lightning speed and perform other tasks like human beings. Some libraries that help create such AI-based applications are Keras, OpenCV, and NLTK.

Being the most popular language, Python is being taught in many organizations to upgrade the skill set of their existing engineers. Every organization wants to expand its offerings by delivering Python application development services, and thus, it will keep on investing in training. Moreover, with its popularity, more and more students are going to educational organizations opting for Python courses for brighter career prospects. So, it is the right time for any Python development company to hire dedicated python developers as the demand is going to soar.

As Python is incessantly progressing, it is very suitable for Cloud computing applications in 2022. The most critical factor in the cloud is data management and data security, and Python applications can be ideal for this. Moreover, because of its capability to offer dynamic solutions for multiple services on cloud servers, many reputed names of cloud service providers like AWS and Google Cloud swear by Python language.

Though it is already charting on no 1 in the list of use of programming languages, it is assumed that Python will further soar high due to its powerful features. Python not only gives liberty to organizations to stay relevant to the times by making modifications to web apps, but it also offers a wide range of libraries and frameworks to choose from.

Python frameworks are among the fastest-changing technologies that will see more systems and plugin updates in the upcoming months. Therefore, it is expected that frameworks like Django, TurboGears, CherryPy, and Pyramid will witness significant updates to keep the Python language up to the mark in the coming days. Python developers will have to stay updated with the rapid advancements to give tough competition to their peers.

Python language is a brilliant tool for fetching heaps of information and data from data-rich websites. So, the businesses which need to work with big data will prefer developing their application in Python. Moreover, Python can also be used for image processing using the programs like Inkscape, GIMP, Paint Shop Pro, and Scribus. It is also used in many 3D animation programs, increasing the demand for Python developers.

As we have seen, Python is leading the industry and will be more popular due to its widespread use and effectiveness.  Its power will be harnessed in multiple sectors to deliver the best applications that offer an unmatchable experience to the users. Therefore, it is high time to hire a Python developer or a Python development company as your IT partner if you have still not invested in it.

Why is PHP Not Going to Die Anytime Soon?