As we progress further, we enter into an era of applications. While mobile applications stay relevant, there is white space for different types of web applications in the current ecosystem. Many application development frameworks are being used to develop a variety of apps, of which Flutter is a prominent name. The name of Dart programming comes in sync with the flutter framework. How are they related? Here is a simple introduction for you to understand both of them and the connection between them.

Flutter is an open-source framework to develop cross-platform apps. Google released it in 2012. Companies often hire dedicated flutter developers as they get to use only one codebase to develop native mobile applications for Android as well as iOS. Flutter framework has two main parts which are the SDK and the UI library. The former is the Software Development Kit and the latter is the collection of reusable UI elements that can be customized and personalized as per the requirements. Today, flutter development services have gained prominence as they can be used to develop web and desktop applications also.

Dart is an object-oriented, client-optimized programming language used for developing applications for different platforms. Dart has been developed to serve as a technology suite for great development and high-quality production experience. Many companies get into Dart programming to create highly responsive user interfaces for the web as well as mobile applications. Dart is a compiled language which implies that any dart programmer would need a compiler to transfer it into machine code. Many of the concepts such as class, function, and interfaces are similar to other programming languages.

How are Flutter and Dart Related? 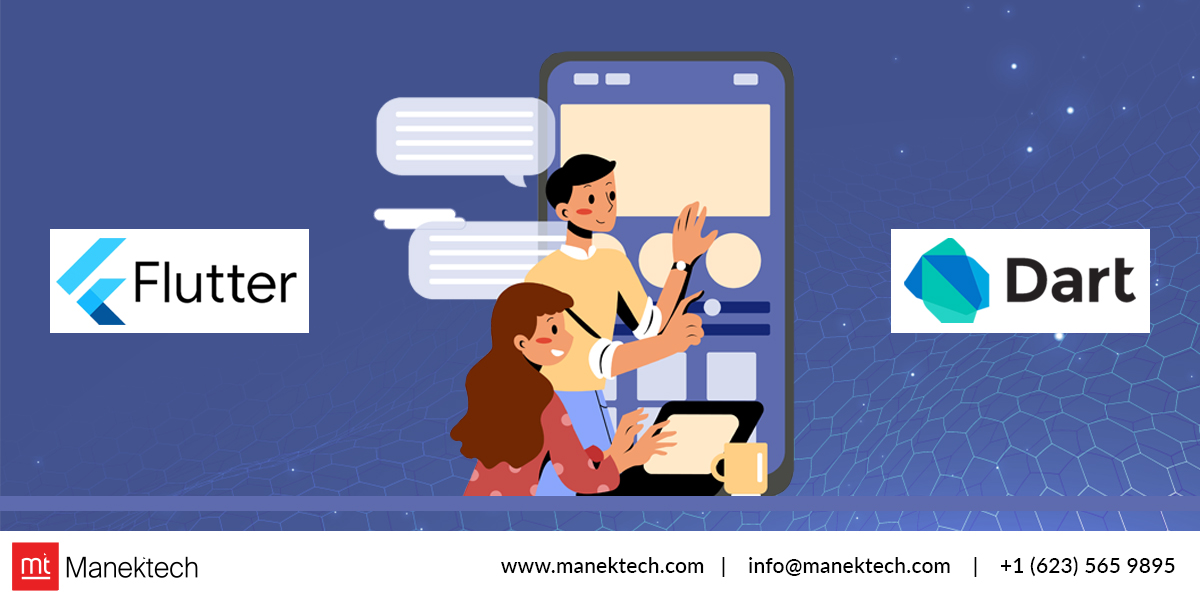 Dart is the programming language for Flutter apps. We can also call flutter development as Dart Flutter development. You can use Dart Virtual machine to run Flutter on different operating systems. This virtual machine brings time-saving features such as hot-reloading with the help of just-in-time code compilation. Dart provides the runtime and language to power the Flutter apps. Besides this, dart also offers support to many core development activities such as formatting and testing the codes.

Dart is known to be an easy-to-learn language that can be easily picked up by programmers from varied programming backgrounds. Dart has many built-in libraries such as dart:convert and dart:io. It also has a package manager pub.dev. Then we can talk about the amazing features offered by Dart. There are features like hot reload and declarative programming that ease the work of the developers and fasten the development process. The flutter developers can write codes and use the hot-reload feature to immediately reflect the changes in the running application without wasting time in a restart. Similarly, the ahead-of-time compilation boosts the performance of the flutter apps by converting the Dart code into machine code for the platform.

Different programming languages like Dart, C, and C++ are used to write the Flutter framework. For user interface rendering, Flutter uses Skia Graphics Engine from Google. Flutter is based on the principle “Everything is widget”. Flutter is all about widgets unlike other frameworks containing controllers, layouts, and views. The widget can be of different types and size. Using Flutter API, the flutter developers can combine different widgets to bring a specific behavior into action. The user interface in Flutter apps can be said to be nested widgets. The flutter architecture is called BLOC (Business Logic Component). It enables the developers to achieve simplicity, testability, and scalability in flutter applications.

‘main.dart’ that exists in the lib folder is the entry point of any flutter app on a device. Other Dart classes are also in the same folder. This ‘main.dart’ file contains some pre-written codes that are used after the application is created. To run this code the flutter developers need to enable USB debugging by connecting any device and executing the command flutter run on the terminal.

The simplicity of using Flutter and the rich feature set of Dart language are worthy reasons to hire a flutter app development company. Dart comes with compiler technology that lets you run codes for native as well as web platforms. Flutter is a multi-platform UI toolkit that can be used to develop applications for different platforms and operating systems. The combination gives us a powerful framework to develop mobile and web applications. The use of one codebase for creating applications for different platforms is a very lucrative proposition that is going to stay relevant for many more years to come. Organizations should hire flutter development services without any delay to develop an application for the maximum possible platforms and operating systems, to capture the largest possible market.

How Are iOS Applications Helping Enterprises To Win The Race?