Your Comprehensive Guide Before Going For Flutter App Development

Mobile or Web applications are no more an option for any size of business to make a lot of money and succeed in the competitive world. But with a constant need increase comes a lot of technologies in the market, making a choice for business difficult. Unfortunately, so many frameworks are available in the market, and so many companies are promoting them from various directions. In such cases, selecting the best one that suits your requirements needs honest guidance. Then, you can choose an eminent Application development solutions provider to have an idea about it. Today, we will show you how Flutter can be your go-to choice for developing any business application.

Google's Flutter is a free, open-source mobile UI framework introduced in May 2017. With just one codebase, it enables Flutter app developers to produce native mobile applications. This implies that you can construct two distinct apps using a single programming language and codebase for Android and iOS.

According to the Stack Overflow survey, Futter is the most loved framework among developers. 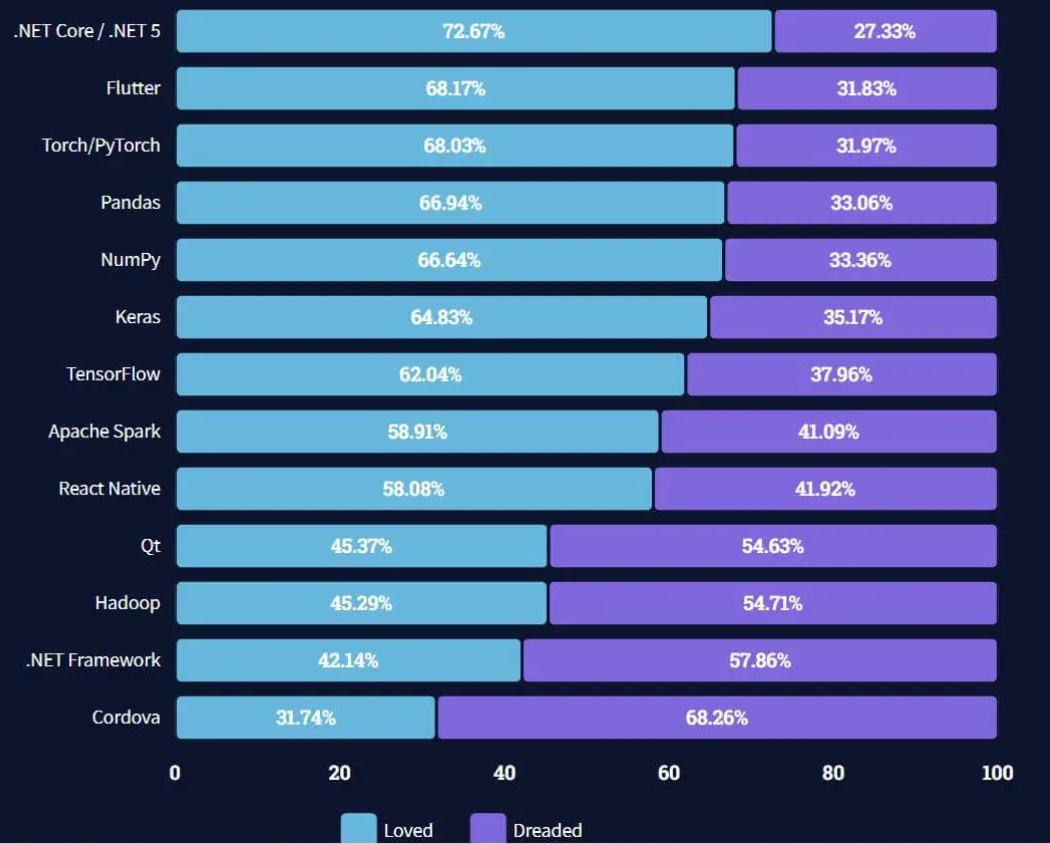 Since its release, Flutter has been used to create various user-friendly mobile applications for Android and iOS without incurring the extra expense of creating separate codebases. This makes it an economic and favorable choice for startups. You can undoubtedly build a feature-rich application for various industries, harnessing different device elements such as geolocation, network, storage, camera, and other third-party SDKs.

But it is also a choice of many influential brands making Flutter a universal choice for app development. Some well-known brands using Flutter are eBay motors, Groupon, Alibaba, Google Ads, Google Assistance, etc.

Cross-platform support- One of the biggest reasons behind selecting Flutter is it is a cross-platform framework that enables users to access your product or application from any device.

Powerful UI Engine- Flutter's UI rendering is pixel-perfect. Every pixel on the device screen is within your control as a Flutter developer. So it is because of the Flutter engine, which is responsible for interpreting Flutter code to define precisely what's pulled out on the screen.

Best suited for MVP- MVPs are simplified app versions that provide the necessary capabilities and are simple to develop and launch. They aid in testing the concept and gathering initial feedback to improve the app in the following iteration. Additionally, since Flutter and Firebase are compatible, developers don't need separate backends to create straightforward MVPs. Therefore, if you want to design an MVP without spending a big chunk, Flutter is the best option.

Less time to market- Since Flutter uses a single codebase for two platforms, it takes less time to develop applications. In addition, compared to other frameworks, Flutter has a clear edge over others due to its ability to make the apps quickly reach the market.

When to choose Flutter?

When the market is flooded with various frameworks having various benefits, it is evident that you are muddled about when to select Flutter.

After knowing about the various aspects of Flutter, it must be pretty clear to the readers why Flutter is a complete package and the right choice for your application development requirements. With Flutter, you can accomplish more with less code and more effectively express yourself. Furthermore, the mobile developer community is becoming increasingly interested in the framework as it expands quickly. As a result, it is now more straightforward for you to Hire Flutter developers from India.